Eng/
sunday Grooves !
Last Sunday of each month from 6.30pm.

Sunday Grooves at Café Béguin is a new musical concept dedicated to Afro Grooves by the Brussels-based composer-songwriter of Togo origin Daniel Dzidzonu.

Daniel Dzidzonu was born in Lomé, the Togolese capital, in 1985. His father managed a brass band that performed at church services, weddings and funerals. That exposure led him to a fascination with brass instruments from a very young age.

Raised in West-African music, he became the bandleader in his fathers band at 16, when he started composing his own music, drawing inspiration from blues, gospel and African traditional music.

After coming over to Belgium in , he started a general course of jazz at the Music Academy of Evere (Brussels), followed by the courses jazz horns and instrumental jazz ensemble, winning the prestigious Prix dAmis awarded by Dominique Clajot, deputy mayor of Evere for Education and Culture, for his brilliant end of the year performance in . In the meantime, he learned the tricks of afrobeat by playing with Fela Kutis legendary guitar player Oghene Kologbo for ten years and occasionally with master afrobeat drummer Tony Allen.

In parallel he has launched his own afrobeat project, performing at festivals all over the Benelux and expanding horizons to the rest of Europe. 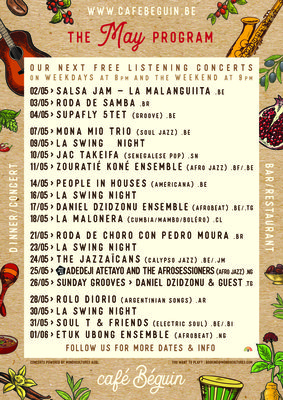