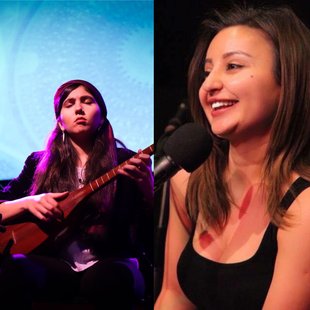 Makam is the modal system used in the Ottoman(Classical Turkish) musical the tradition from the 16th century. Starting with a brief historical and social review, we will try to understand the way that this system is structured as well as the basic elements that it consists of.

Intervals, modes, ornaments and stylistic elements will be described on a theoretical and practical level.

As the voice is a point of reference for the musical system of the Makam, this workshop focuses on the modal system of Makam through the Ottoman classical singing repertoire. Breathing and singing techniques will be also mentioned.
The workshop is beneficial to both singers and instrumentalists. In the old times, as we talk about an oral tradition, it was important for instrumentalists to be able to vocalise the repertoire and the ornaments in order to play them on the instruments.

Improvisation, the pinnacle of the makam musical tradition ! The concept of the form taksim as well as improvisational techniques and methods will be described.

after the 19th century, the classical music of Iran was collected in many old
melodic figures that were preserved through many generations by oral tradition. It organizes the modal system in a number of different tonal spaces called Dastgahi.
Dastgahi music has a modal system, and improvisation is most important part of it. In this workshop we focus on the system of Dastgahi music by playing Tar and Setar. Techniques of playing these instruments also will be treated.

tanbour is more than an instrument, it carries all the literature and history of Iran. There are engravings of Tanbour that go back 6000 years. It is also known as Sufi music. Makams of Tanbour are around 72 which were categorized by Majlesi and Haghani.Tanbour players usually sing while they play and improvise in different Makams. Also the technique of Tanbour to apply the ornamentations of music is unique and will be treated.